We simplify authorization and access control in your application by providing the authorization framework and tools with support for various models like RBAC, ABAC, ACL.

Khulja Sim Sim (open sesame in Hindi) is a fast and easy to use universal authorization framework.
Your apps home for everything related to Roles, Rights, privileges & access control. You control who should have access to what, from where and when.
You focus on business requirements and leave the security & access management of your system to Sim Sim.
Authentication or (authn) means making sure that a person is who (or what) they claim to be, typically secured using a Login feature with user id & password/fingerprint, etc.
Authorization or (authz) defines who has access to what features & functions of your system, by assigning access rights & privileges to users for controlling access based on the users rights & roles.

SimSim is a clever abstraction of authorization. It is this abstraction that allows us to separate authz into an independent component usable in any programming language which has never been done before anywhere in the world.
SimSim will help every developer save time, effort & money for implementing authz in their app. Developers also save on maintenance costs in the long run as SimSim is independently maintained by the community.

We are developers, we want to meet developers where they are by providing a simple and idiomatic solution for the developers.

Implement access control in your mobile apps, web apps and all your desktop apps using any frontend and backend technology of your choice
SimSim fits into your development workflow.
Run SimSim embedded, self hosted, in a container or simply use the cloud hosted version.

The universal login & authentication problem with SSO has been solved to a great extent with OAuth & OIDC but there is no product or SaaS solution in the world for Roles, Rights & universal authorization.
You use the Authentication platform of your choice and plug in SimSim into your app for authorization & access control.

SimSim is fully secure and simple for the developer to use in their app.
The secret sauce is in the way we solve the universal Authorization problem for speed, security and ease of use.

We will take care of your Authorization & Access control needs so you can focus on implementing business requirements.

SimSim is created with two users in mind:
The developer: Developers understands their apps, so they will define all the features of the app on SimSim and enforce access policy.
e.g.: On the frontend, show edit invoice menu option only if user has access to the“edit invoice” feature and on the backend ensure that only users with the EDIT_INVOICE privilege can access the API end point. 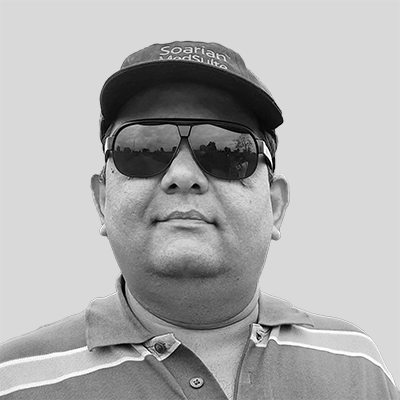 Creator
KP has been part of the software industry for last 35 years after starting out as a programmer after high school in 1985. A problem solver & techie at heart, has helped build and run offshore software delivery units out of Bangalore, India. He has worked on software projects for the kuala lumpur stock exchange, Siemens, DaRT, Asian CERC, Genisys & Mystifly.

In 1994, he was part of the team at Data line & Research technologies that developed India’s first online network called India online (predecessor to the internet in India).

in 1999, at Asian CERC, he developed India’s first internet based stock & share trading platform (The only system offering live streaming quotes in India at the time).

He has diverse international experience with professional engagements in 7 countries outside India (Malaysia, USA, UK, Vietnam, Canada, Sweden & Germany.
Co-founder & CTO of White label e systems (a Forex trading & Treasury management solutions company based out of Mumbai, India)
He is the founder of Soarian Technologies and lives in Bangalore, India.